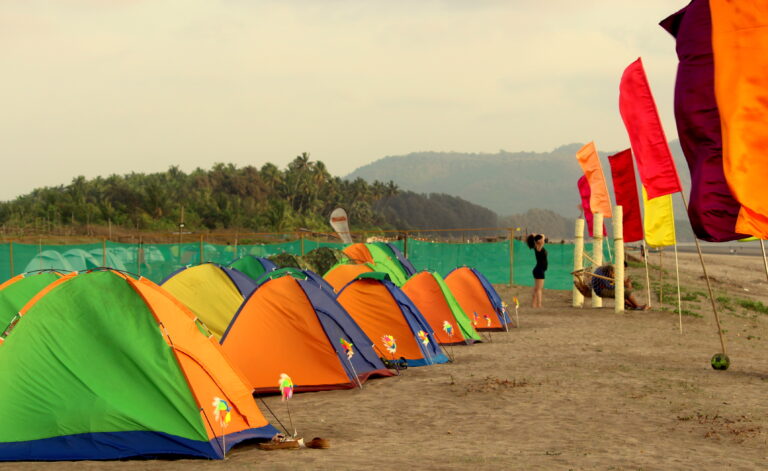 There are a few weekend getaways from Delhi that are still off the beaten path for many tourists, so they aren’t as crowded. Kanatal, 38 kilometers from Mussoorie, is one of these places. It’s a peaceful and beautiful community nestled in the Himalayas, surrounded by forests. It’s ideal for a camping and adventure weekend in Uttarakhand’s beautiful hills.

Camping in Kanatal may be both adventurous and relaxing, depending on what you want to get out of it. The most adventurous activities in Kanatal are trekking, rock climbing, and rappelling. For those seeking complete calm and nature’s drama, stargazing is a bargain.

What tales say about Kanatal

Kanatal prayer flags with camps in the backdrop

Kanatal is a quiet Himalayan retreat that few tourists are aware of. The name means “one-eyed lake,” and it was given to it after a nearby lake dried up. According to legend, this is the location where Lord Shiva brought Sati’s body from Haridwar. At 9,995 feet, there is a temple dedicated to Goddess Sati. The climb up is well worth it because the 360-degree panorama is truly breathtaking.

What is the best way to get to Kanatal from Delhi?

Kanatal, which is about 300 kilometers from Delhi, is well connected to many Indian towns and cities by air, rail, and road. By plane: The nearest airport to Kanatal is Jolly Grant Airport, which is 90 kilometers distant. To get to Kanatal, you can take a taxi or take the bus, which will take you three hours. There are frequent flights between this airport and Delhi. By plane, it takes 4 hours to get from Delhi to Kanatal.

By road: This is the most cost-effective and scenic route to Kanatal. The route is free of serious problems because the roads are well-maintained. If you’re taking the bus, you can choose between luxury and regular buses. Take a bus to Mussoorie, Dehradun, or Haridwar, and then take another bus or taxi to Kanatal. By road, it takes 8 hours and 30 minutes to get from Delhi to Kanatal.

By train: The closest railway stations to Kanatal are Dehradun and Rishikesh, which are 78 kilometers and 76 km apart, respectively. Both of these stations have excellent connections to many cities and towns in Northern India as well as other regions of the country. Getting a taxi or bus from either of the railway stations is not a problem. By train, it takes 12 hours to get from Delhi to Kanatal.

When is the best time to camp in Kanatal?

At night, a shot of the Kanatal campsite

Throughout the year, Kanatal welcomes visitors with pleasant weather. As a result, the best time to go to Kanatal is whenever you want. Winter (October – February): In Kanatal, winter is a magical time! The entire area is buried in snow, giving it the appearance of a winter wonderland. Temperatures plummet to as low as 1 degree Celsius. If you’re visiting around this time, wear heavy winter gear to remain warm.

Monsoon (July–September): Monsoons are known for their intense rain showers. This is also the time of year to see the valley in full flower. Landslides are a possibility, so camping in Kanatal during the monsoon is not recommended.

Day-by-Day Itinerary for Camping in Kanatal

Adventure sports, breathtaking terrain, and an evening with a bonfire and music are all part of the camping experience in Kanatal.

This entire experience is refreshing, and the icing on the cake is that it is only available on weekends. So, for a two-day excursion, here’s a suggested agenda.

The following are some crucial considerations to make before going camping:

Kanatal, a charming village in the enthralling valley of Uttarakhand, is an undiscovered paradise where happiness meets heaven. Kanatal, at a height of 2590 metres, is one of Uttarakhand’s hidden gems, less well-known than nearby cities like Mussoorie and Rishikesh. In a nutshell, exploring Kanatal is similar to visiting Heaven on Earth, where you can renew your soul and discover a new you. It’s an out-of-the-way travel destination with a few adventures, picturesque valleys, Calm Mountains, and everything with a twist and thrill. If you want to relax, Kanatal is the place to go.

Why Using a Cannibeast Delta 8 Cartridge Is a Good Option