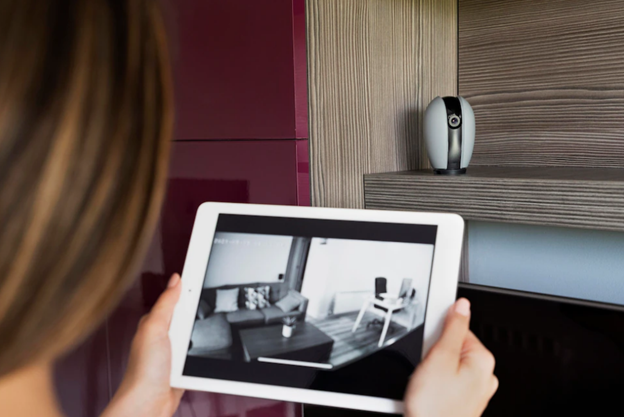 It’s a task every parent must undertake, babyproofing and childproofing their homes once there is an infant in the family. To the point that people even install childproof door locks on their cars for the safety of their kids.

So what does childproofing a home mean? It’s making your home a much safer place for your child to avoid any accidents or prevent harm to them in general. Childproofing can be anything from cabinet locks and doorknob covers, to installing a gate for the stairs and using outlet covers because electricity is no joke.

There are numerous ways and hundreds of suggestions people can give in order to childproof your home for the safety of your kids. While all of those may be highly important to implement, because even the things that we don’t expect can cause harm, there are also certain devices that can help with the childproofing of your home.

Here’s a look at some devices you should consider investing in especially if you have children in your home.
Childproofing Using Technology and Gadgets

Smart Cameras will be your best bet at monitoring your kids, and they’re even better with more features compared to baby cams. But aren’t smart cameras more for surveillance? Well, they are, but the best thing about such devices is that they are available in batter variants too.

Wired smart cameras only have to be plugged into a power outlet with no additional wires needed, so it makes for a great substitute for smart cameras since you can use them indoors too. You should probably check out Google Nest’s white indoor security camera – they’re said to be the best.

So how do these cameras and childproofing go together? Smart cameras are connected directly to your smartphones, which means you can watch the live video on your phone. These devices also boast two-way audio, so you can speak to your child and let them hear your voice, while also being able to hear them too.

What’s even better is that since the video is accessible from your phone, you can watch over the babysitter and your children if you’re out for dinner plans.

Smart cameras serve as a method for you to watch over and be able to speak to your children, regardless of wherever you happen to be. Their mobile apps also send in alerts if they detect any movement so that you can keep tabs every minute.

In a home where there are kids, there definitely should be functional smoke detectors in place. Home fires are very common, and so are gas leaks like that of carbon monoxide – it’s always important to make sure the smoke detectors in your home are functional regardless, especially in rooms where children frequent.

If the fire isn’t a problem often, then carbon monoxide is because this gas is lethal for humans and animals alike. Other than being efficient at detecting hazards, smart smoke detectors can even send instant alerts to your smartphones so you can act quickly and prevent any damage just in time.

Children are curious creatures, and you would find that once they begin walking, one of their favorite hobbies is to open doors. It’s a fascinating thing for little ones. However tampering with doors can be dangerous – it can cause accidents like a hand or finger getting caught in the door. Other than that, young kids, take 5 or 6-year-olds love answering the door. This can potentially be dangerous because you never know who’s outside.

That is why we would suggest using smart door locks since these are keyless and tamperproof and can only open upon certain commands or in certain ways – ones that kids won’t be aware of and can’t do so given the restrictions that can be implemented on these devices. Smart door locks use passcodes or mobile phone access to lock and unlock doors.

You children would have to be really sneaky to figure out the passcodes or know how to unlock the door from the mobile app. But nonetheless, it’s a sure way of knowing your kids won’t just open the door for anyone if the bell rings, or try to go outside just because of curiosity like kids usually do.

Children while growing up are curious creatures so there is no doubt that they can become sneaky over time. They’re only trying to get answers to questions that they have. That is why it’s suggested that babyproofing and childproofing your homes should be a priority – it lets them explore whatever it is that they wish to, with minimal accidents. And it also means you don’t have to replace pretty much a lot of things in your home.

In the same way, technology can also be very useful when it comes to childproofing. It won’t mean covering table corners or minor things like that, but certain devices and electronics like the ones mentioned above can help you monitor your kids all the time and keep them safe.

Garden Beds On Legs: What Is So Special About Them?

Get inspired with these tapestries ideas